R U OK co-founder Graeme Cowan has been overwhelmed with support and messages of solidarity after sharing a suicide note he wrote in the depths of his depression 15 years ago.

Mr Cowan is now a leading motivational speaker and posted his note to social media this week in the hope it would spark a conversation that could ultimately save lives.

It has since gone viral, being viewed or reposted more than 70,000 times with people sharing their own stories of hope and survival.

“I’ve had so many comments, and from people of the world, just saying that this is a really, really important discussion.

“Because people are all touched by it. It might not be specifically suicide, but it’s definitely depression or anxiety or post-traumatic stress.”

As R U OK Day — a national day of action to encourage people to reach out to others who may be struggling — is held for the 11th time today, Mr Cowan said the message was as vital as ever.

‘You get stuck in thought loops’

It was 2004 when Mr Cowan found himself at his lowest point and decided to act on his suicidal thoughts.

His family found his unconscious body and the handwritten note, and was able to call for help and save his life.

Mr Cowan said the note appeared lucid because he had been dwelling on the thoughts for two years, but the reality was it was a sign of mental illness.

After four long years of battling this illness I just can’t take it anymore. I feel I have tried everything and just can’t see anything but a depressed future.

I would like to thank everyone for the love and care you have all shown me. I couldn’t ask for anything more.

Please don’t blame yourselves in any possible way for this as there is nothing possibly that you could have done.

P.S. I just can’t be a burden any longer.

“One of the things about being depressed is that you become very, very insular,” Mr Cowan said this week.

“And when you are insular you go into your own thought loops and you think it’s a good idea.

“I genuinely thought that my family would be better off without me, and that does show I wasn’t entirely level headed. I know that’s so far from the truth.”

Mr Cowan said there was no single thing that helped him turn his life around, but it started with the simple acting of going for a walk, which led to meditation and reconnecting with family and friends he had withdrawn from.

Australia’s suicide rate sits at 12.9 per 100,000 — above the World Health Organisation’s global average of 10.7 — and is far more prevalent among men than women.

There are lines in Mr Cowan’s note that may be familiar to those who experience anxiety and depression.

In particular, he said his belief that “I just can’t be a burden any longer” was something that people struggled with.

“It’s very real. The research shows that it is a prompt for a lot of people to take their lives,” Mr Cowan said.

“What I would say, and this may sound hard, is to actually tell people how you are feeling, especially men. Men want to bottle it up.

“Because there is something profound about sharing it with another.”

10 years ago, the late Gavin Larkin started R U OK? because he believed that, “In the time it takes to have a cuppa you could start a conversation that could change a life.” His mother, wife and daughter share why this is still true today.
@TwiningsAU #RUOK #RUOKDay 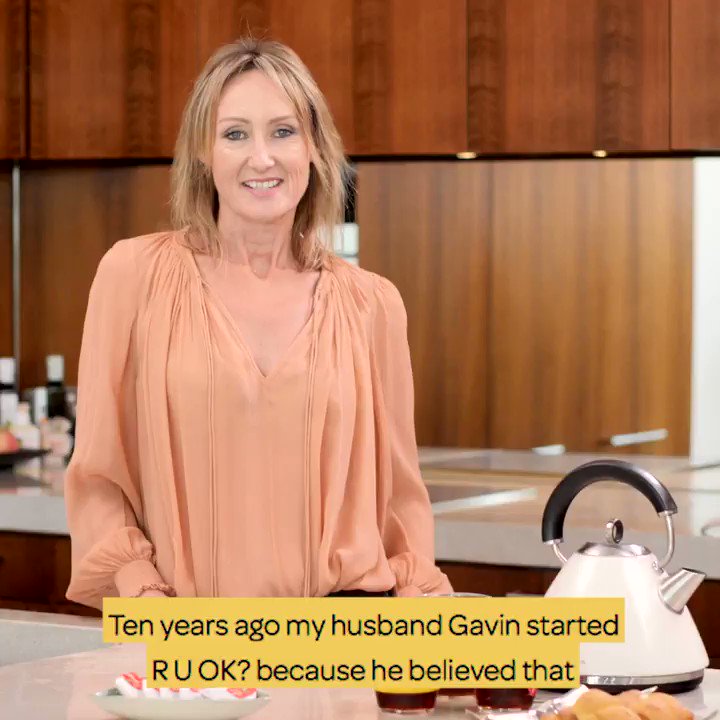 Mr Cowan also had advice for people who supported a loved one with depression and were struck by his line that “there is nothing possibly that could have been done”.

“Just being there and showing care and following up and thinking about how they can support is a huge element,” he said.

“But also not being afraid to encourage them to keep trying things.

“When people are in the red zone they think very black and white,” he said.

“It’s not the full picture if you’re not with an expert.”

Mr Cowan and R U OK charity are now planning to take their message global.

“We profoundly believed in the concept, but we’re just delighted with how far it’s come,” he said.

This article first appeared in https://www.abc.net.au